A Ripple or a Splash?: The Life and Legacy of Nelson Mandela

A pebble thrown into a body of water makes a ripple effect. A rock makes a splash. This too can be said about the way we choose to live our lives. We can choose to make a ripple or a splash. When I think of Mr. Nelson Mandela and the sacrifices he made and the stands he took to make a difference, it’s evident that he made a big splash. His life and legacy will always be remembered and lives will be forever changed because of his selflessness. He was willing to be smaller to help a nation rise. Are you making a ripple or a splash? It’s never too late to make a difference and it doesn’t matter what you have been through. Mr. Mandela is a testament of that. Most of his impactful work was done when he was over 70 years old, after he was released from 27 years of imprisonment. A ripple or a splash? The choice is yours.

“What counts in life is not the mere fact that we have lived. It is what difference we have made to the lives of others that will determine the significance of the life we lead.” ~ Nelson Mandela 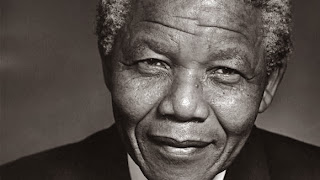 
Rest in peace Mr. Mandela
Posted by Cherlisa at 9:34 AM No comments: